The last thing she remembers before the world went black was falling face first into a cast iron skillet. Now, as she returns to consciousness, the first thing she notices is the taste of iron on her tongue, not from the skillet but from blood which has formed tributaries across her face and merged in a delta in her mouth. She spits it out. Salt water crusts her eyes. Did the tears come before or after she tripped and fell over her father’s bones?

It doesn’t matter anymore how or when the plane crash happened, only that it happened. More than twenty years spent waiting for, and wondering if, he would return had finally culminated in her discovery of the overgrown remains of the plane her father was piloting when he last made contact with the outside world.

She sits up and the blood rushes from her head. Bracing herself on the soft forest peat as best she can, she sits up and struggles against passing out a second time. Slowly rising to her feet, she turns her attention to surveying her surroundings.

In addition to the cast iron pan, there is other detritus of a rough campsite littering the forest floor: two rusted out jerry cans resting against a log, a circle of stones marking the spot where a fire had burned, a mouldering canvas backpack revealing a hatchet, boots, lantern, and cook stove. This is all she can see from her presently limited vantage point. It appears he may have just started unpacking, or perhaps he was preparing to leave. He was good at leaving.

Her eyes wander to the remains of the small aircraft. She approaches tentatively, wondering what clues it may hold about why the crash occurred. In the 22 years since the disappearance, nature has taken over, turning the plane into a corroded, overgrown artifact of history. She marvels at finding evidence of animals that have since claimed the relic as their home and hiding place. She envies their adaptability.

No one else was on board that day. Her father, against others’ advice had insisted he would fly alone. He could be so intractable. Regular arguments had erupted between him and her mother around his stubborn insistence on having things his way.

Despite the near constant tension, her parents had a loving bond. Which is why it comes as a total shock to Jess when she finds the skeleton of a woman caught in a matted bed of weeds near the wing.

She knows it is a female by the gold band on her arm. One just like it had adorned her mother’s wrist until she threw at Jess’s father in a rage. “Sonofabitch,” she thinks. “You can’t be serious. The cheap philandering bastard.” She feels a wave of compassion for her mother and for this woman too, who had so obviously been betrayed by her father’s false devotion.

A torrent of unwanted memories and emotions flood her body. It’s true. Every murmured rumour amongst the gossiping bitties in town about her father’s fooling around was right. He hadn’t been faithful to his wife — or to his little girl.

She wondered if faith had played any part in his life before he died. Were there any prayers over his illicit lover’s body; any admonitions that he would be a better father and husband if only God would let him live?

In that moment, with a bloodied face, swollen eye, and a heavy heart, she realizes that it doesn’t matter to her anymore. She has spent a lifetime searching for this plane and the answers it contains, and now she has found them. It is time to lay her memories and the strain of her long, searching, journey to rest.

She returns to her father’s corpse, removes the heavy pack from her shoulders, grabs the pan, and starts digging.

Image by Pexels from Pixabay 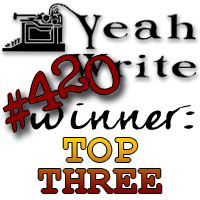